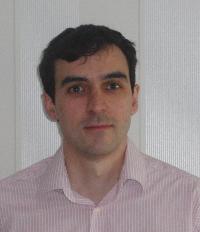 Meet Alejandro Moreno-Ramos – aka “Mox” – a full-time technical translator and former electrical engineer. Alejandro is also the creator of Mox’s Blog – a series of comics depicting the misadventures of a fictional freelance translator, based loosely on the experiences of the author himself. Alejandro will be presenting at the upcoming conference in Biarritz, France, on the subject of “Automatisation de tâches – Laissez l’ordinateur se charger du « travail sale » afin de multiplier votre productivité.” Attendees will have the chance to meet the creator of Mox’s Blog and purchase signed copies of his books featuring comics from the blog.

You can learn more about Alejandro and his stick figure alter-ego by visiting Mox’s Blog at http://mox.ingenierotraductor.com/

MK: What was the most important obstacle for you to overcome in building your career as a language professional?

AMR: Previously to working as a freelance translator, I worked as an electrical engineer for a big company and the fact of quitting a good and secure job was difficult.

Once I made the decision, my setting up as a full-time language professional was reasonably easy. It’s fair to mention that being a ProZ.com member helped me a lot at the beginning, both for attracting new clients and for learning the state of the art of the industry.

MK: What is the greatest issue facing translators working in France or with the French language?

AMR: I’d say that social contributions, and to a lesser degree, the tax burden in France are a real challenge. In 2008, the French government introduced a new sole-ownership type of business, called auto-entrepreneur, which is an amazing invention because of many reasons, but it is not a good solution for most freelance translators. As of today, freelance translators in France typically spend more than half of their revenue in social contributions and taxes.

Regarding the French language, I do not translate into French, but I think that Frenchmen are gradually losing their traditional love for their language. For example, it is deplorable seeing people with postgraduate degrees making so many spelling mistakes.

AMR: Via my website, I get many requests for free translations from individuals I don’t know.

MK: What is your prediction for the future of human translation?

AMR: I can’t imagine a computer translating accurately gas turbine maintenance manuals in the near future, so I guess that I’ll have translation work for a long time, but on the other hand I do fear that the progress of machine translation decreases further the prestige of our dear profession.

MK: At the upcoming conference in Biarritz, France, you will be presenting on the topic of “Automatisation de tâches – Laissez l’ordinateur se charger du « travail sale » afin de multiplier votre productivité.” What can attendees to this session expect to learn?

AMR: To take advantage of sheer processing power of modern computers. I’ll try to show how to earn more money while avoiding the most tedious tasks.

The ProZ.com conference in Biarritz kicks off this Thursday with a pre-conference powwow at the Miremont Bellevue restaurant, the theme of this gathering being “Hints and Tips: best tips, tricks and/or practices to make our lives as translators easier.”

You can check out all of the activities surrounding this event by visiting the “Social” tab of the conference page: http://www.proz.com/conference/449?page=social

If you’re interested in attending this event, it’s not too late to register here: http://www.proz.com/conference/449